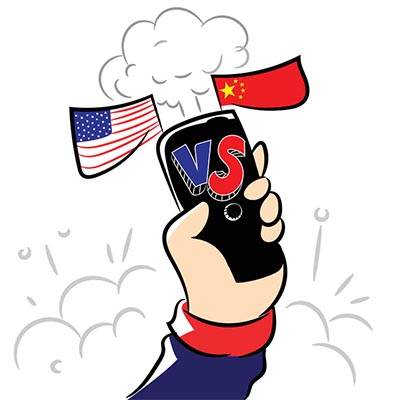 Make no mistake about it, Huawei is one of the largest technology companies in the entire world. It employs over 200,000 people and in 2018 saw revenues of over $100 billion. Over the past few years, their devices have been pushing the boundaries of what is possible in tech all while being relatively unavailable to one of the major technology markets in the world, the United States. The fact is that outside the U.S., Huawei is a major player.

The reason the tech giant has been shut out of the hungry U.S. tech market has been because there are very legitimate fears of collusion with the Chinese government. This is something that U.S. leaders clearly understand. The U.S., who has been at the forefront of digital surveillance, understands that the more data that is tracked, catalogued and analyzed, the more information is learned. For lawmakers in the U.S., providing the communist Chinese government in Beijing an in to collect information about American industry, U.S. citizens, and the like is looked on as oversharing.

On May 16, the United States doubled down. They added Huawei to their U.S. Commerce Department’s Bureau of Industry and Security’s “entity list”, effectively barring U.S. companies from doing business with Huawei unless they get explicit permission from Washington. The official reasoning? Huawei “is engaged in activities that are contrary to U.S. national security or foreign policy interest.” Most people in the know have made mention to the ongoing trade war with China being the actual impetus behind the move.

Whatever the reasoning, this act set off a firestorm for the Chinese manufacturer. Huawei’s smartphones run on Android, their computers run Windows 10, these are obviously products of U.S.-owned properties Google and Microsoft, respectively. This means that after August 19, the tech giant will no longer have access to the operating systems their devices run on; and, if you consider all the other U.S. companies they have agreements with (such as NVIDIA and Qualcomm), the decision to put Huawei on the entity list puts a lot of pressure on the company.

Huawei has announced that they have been developing their own OS for a while now, but by having to pivot that abruptly, it will be extraordinarily costly for the company. Since Android is an open-sourced software, they could still use a custom version of that, but they wouldn’t be supported by Google’s terms of service, meaning those customers wouldn’t have access to Google products, including the Google Play store which fuels Android mobile devices. More than any other issue, not having access to apps can sink a mobile platform, just ask Blackberry. In fact, some of the largest companies in the world have tried to create App stores, and only Apple and Google have done it proficiently.

Moreover, even if they were somehow going to figure out the App store situation, not having access to American-developed applications will leave an undeniable hole in the offering, at least in the short term. Apps like Google Chrome, Gmail, Facebook, Twitter, YouTube, and others of the like wouldn’t be available on the environment. While individual users could still use these services through their web browser, apps help mobile function.

It will be interesting to see what Huawei’s strategy will be over the upcoming months to try and mitigate a massive revenue loss; or, if it can convince the U.S. lawmakers that have taken this measure that the company isn’t in Beijing’s pocket. Only time will tell. Have you ever used any Huawei devices? What do you think of the U.S.’s plan? Leave your thoughts on these questions and more in the comments below.